Helping the business athlete stay active for more than 18 years 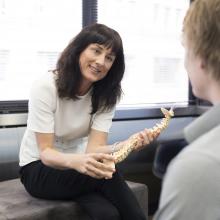 Dr. Kimberley McLean, DC, graduated as a chiropractor in the USA 15 years ago. After 5 years of practice in San Francisco Dr. McLean returned to New Zealand where she has been practising in the Auckland CBD ever since. She uses a total body approach that encourages patients to take charge of their health more quickly. The approach emphasises the administration of rehabilitative exercises, trigger point work to help release the surrounding muscles along with traditional chiropractic techniques.

Dr. McLean’s experience with structural malfunction involves a significant number of cases arising from repetitive stress injuries, posture imbalances, pregnancy and spinal misalignment. Many of these cases involved malfunction to the spine, hips, shoulders and extremities.

Originally from New Zealand, Dr. McLean earned her undergraduate degree from Otago University in Dunedin (BPhEd, 1996) before heading to the States for her Doctorate. While working in San Francisco she was actively involved in several local sports teams where she was ‘Chiropractor/Sports Doctor” to the Mens San Francisco Golden Gate Rugby Team and the Ulster Gaelic Football Club. In 2003 she joined the US Gaelic Football Team to travel to Dublin Ireland for the World Championships.

Conveniently located in the heart of the CBD on Shortland Street, Kimberley sees a wide range of people- from sitting behind computers all day long to elite sports people.

Member of the NZCA